Spot the difference between Hawksbill and Green turtles

When you know what to look for it’s easy to spot the difference between Hawksbill and Green turtles. However these two species of sea turtles often cause confusion amongst both divers and snorkellers. One of the easiest ways to distinguish them is to have a look at their beaks. Hawksbill turtles have a sharp curving beak with a prominent cutting edge as in the image below. 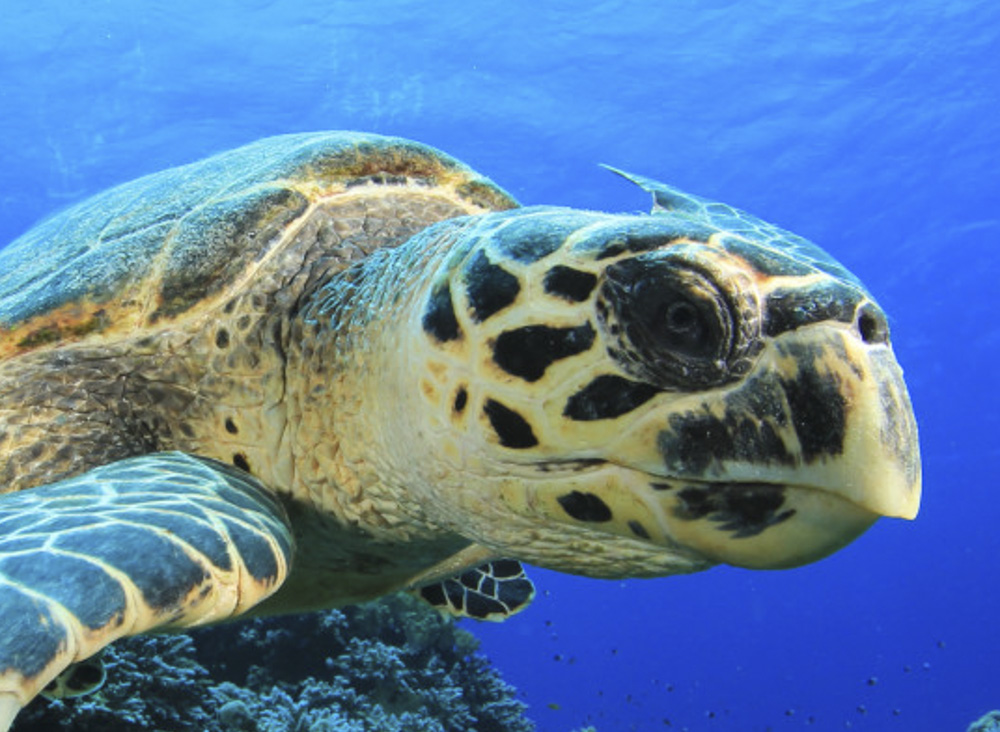 Green turtles look quite similar to Hawksbills but their beaks are not quite as sharp or prominent as can be seen in the photo below. 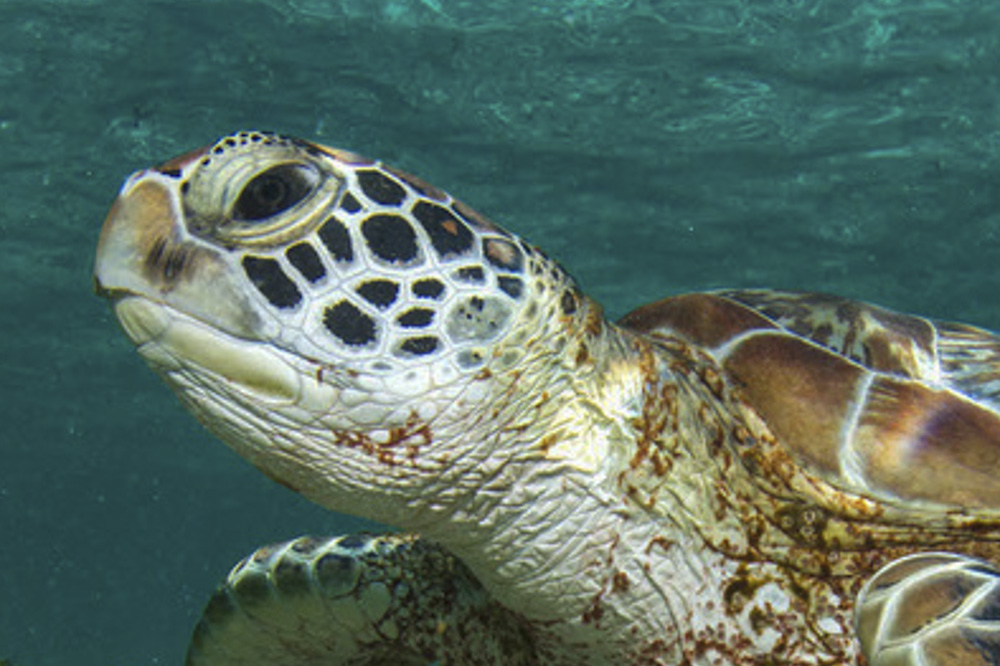 Green turtle – less sharp and prominent than the Hawksbill.

Both species are found in tropical and sub-tropical oceans around the world with the Green turtle being more common. Green turtles have a tear dropped shaped shell and are not actually green – their shells are olive brown or even darker occasionally. They get their name from the colour of their fat and flesh and are mostly herbivorous feeding on seagrass. Hawksbill turtles feed on sponges but will also eat invertebrates such as jellyfish. Sea turtles can live over 80 years so when you meet a large turtle in the ocean you’ll notice a wisdom in their eyes. In some parts of the world they can be very curious of divers and I’ve had them even come up and peer right in my mask. I find that if I gently mimic their slow movement of their flippers this seems to make them extra curious. It should go without saying that you should never touch a turtle. You have to respect any turtle which makes it to adulthood as the odds are stacked against them. Females lay over a hundred eggs in the sand on a beach which take about 45 days to hatch. Often birds pick off quite a few as they make their way to the ocean where they are tapas for a wide variety of marine life.

I occasionally organise snorkelling holidays to the gorgeous Komodo marine park in Flores, Indonesia where we’ll see turtles, manta rays and Komodo dragons. More info is here. There are many organisations around the world working to protect turtles including the Turtle Foundation – a link to their website is here.

Others way of telling them apart

There are a a couple of other ways of telling the difference between Hawksbill and Green turtles. Both species have claws on the edge of their flippers with the Green turtle having one claw and the Hawksbill two (per flipper). Their shells – known as carapaces – are also slightly different in appearance. The edges of the carapace of a Green turtle are more rounded and smoother than A Hawksbill which have a slightly serrated look.

Difference between male and female turtles

A good rule to tell the difference between the sexes of sea turtles is to look at their tails. Generally males have longer, thicker tails of the same species – when they are fully grown. Turtles live a largely solitary life and mating only usually happens during a limited receptive period prior to the females nesting emergence. Males court females by nuzzling their necks and heads. If the female doesn’t flee he’ll attach himself to the back of her shell using his claws on his front flippers and this process can be quite an aggressive affair. He may also bite her neck and it’s not uncommon to cause wounds that may bleed and take some time to heal. Females will mate with several males prior to nesting season and store their sperm for several weeks. When she finally emerges out of the water to lay her eggs in the sand they will have been fertilized my many males which helps keep genetic diversity. Male sea turtles never come out of the water.

Females return to the same beach where they last nested and nearly always come out of the water at night. Much more cumbersome on land, they pause regularly as they come up the beach to choose their spot to lay their eggs above the high tide mark. Using her flippers she removes sand to make a body pit by rotating her body. She then excavates an egg cavity using her rear flippers. Two or three eggs come out at a time and she’ll lay between 80 and 120 eggs. Observing this behaviour you might think the turtle is crying but she is just excreting excess salt from her body in tear drops. Incubation takes between 45 and 60 days depending on the temperature of the sand. Cooler sand leads to more males hatching and vice versa.

Baby turtles usually hatch at night and digging their way out of the sandy nest is a group effort that can take a couple of days. They then emerge on mass and scurry to the ocean using the brightest part of the horizon to find their way. Plenty of dangers luck on this journey including predation by birds and the risk of dehydration. Once in the water they will often swim several kilometers off shore where they can get caught in currents which can carry for them for many months before returning to shallower waters. Baby turtles are tasty tapas for sharks and fish and only abour 1 in a 1000 will survive to adulthood.